Doctors with OCD - it's actually quite a big club 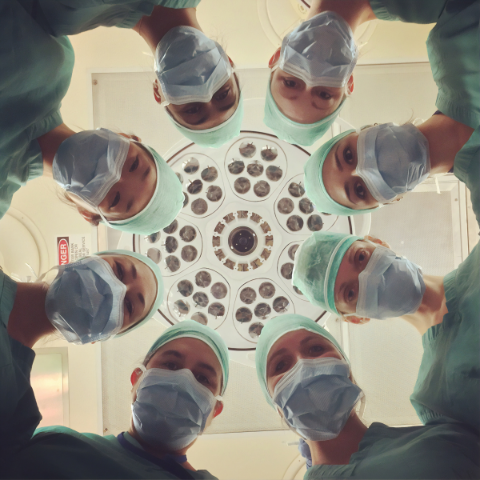 No one knew and that’s how I wanted to keep it. I didn’t want people to realise how irrational my brain could be. I didn’t even consider that there were other doctors with OCD. ‘IT’ was part of me, I believed, an unchangeable ingredient of my very being and I needed people to think I was well-balanced. No weakness allowed. So, the increasing amount of time the OCD stole I needed to give back so that no-one noticed - take it out of my time, time I should have been with my family, with my friends, anywhere but at work. Not telling anyone was a coping mechanism I used for over 30 years and to be honest it wasn’t working out well. As a child and a teen the time consuming rituals ‘to keep my family safe’ were my secret. As a medical student and junior doctor I buried the OCD under the façade of being conscientious. I became a pathologist and it just took root.

Left unchallenged the OCD seeped deeper into every aspect of my life, targeting everything I cared about. I felt like I was letting it happen which meant it was my fault. Every day I’d drive into work and tell myself that today I’d be better. Every New Year I’d make it my resolution. All I needed to do was each aspect of my job once, then move on, don’t check it, don’t read the report again and again and again, re-starting, emphasizing the crucial words, checking they haven’t mysteriously disappeared from the computer screen. All of the checking was because the doubt was unbearable and the consequence of an error was unthinkable so I calculated that sacrificing my time by checking my work twenty, thirty, forty times was a small price to pay for 100% certainty that the reports didn’t omit crucial or contain ‘rogue’ words.

I hit crisis point. My husband said he almost phoned my senior colleague one evening to ask why I was staying at work so late. That would have been awful because she didn’t know! I was a doctor with OCD, and it was really bad. Doctors are meant to be able to deal with anything so why couldn’t I sort this out myself? I considered leaving medicine under the guise of ‘moving on’. That way, I thought, I could leave with my reputation in-tact and no-one ever needed to know about the OCD.

….or…I could get help. I reassured myself that no-one needs to know (well nearly no-one) and if I get better I could then choose whether to stay in medicine or not. Executing my plan of action wasn’t easy. I couldn’t say ‘OCD’ without crying. I cried through my GP appointment, and he told me about IAPT. I self-referred, had courses of CBT but the OCD was so severe that I was referred as an outpatient to the Specialist OCD Unit at Springfield Hospital.

Then slowly but surely I was changing the way I thought. OCD is a champion liar but I was starting to fight back. At the same time, I discovered that when I confided in those close to me, it was okay. It was okay for them to realise I wasn’t perfect. It was okay for me to reach out for help because those who cared for me were there, on standby to support me. My therapist guided me through the OCD fog. I stopped feeling weak and thinking it was my fault. It dawned on me that I wasn’t the only person with OCD and I wasn’t the only doctor with a mental illness and I was one of many doctors with OCD.

I came across another doctor who was refreshingly open about her mental illness. I didn’t think she was weak or respect her any less. In fact I admired her. Showing vulnerability is more than okay, it’s being open and honest and that opens the door to others feeling they can be honest too. I no longer feel I need to compensate for the OCD I have hidden for so long by portraying myself as some kind of superhuman doctor, wife and mother.

I still have ‘weird’ intrusive thoughts but I don’t have to yield to them and the irrationality of OCD sets up a good stall for being able to tell others that there’s nothing they can say that shocks me.

So here I am, still a doctor, still working in Pathology and I’m pleased about that. I got better and chose to stay. Tasks that are mundane for others still challenge me but changing the way I think has helped me to change the way I behave. OCD thrives on shame and ignorance and I fed it for far too long. I admit that I quietly hope I’m respected for in the workplace for my diagnostic skills. However, my real value is in being honest about who I am, mental illness included, dispelling the stigma I once felt about myself, reaching out and connecting with other doctors who are struggling and suffering in silence and encouraging them to take the first steps to recovery and acceptance….

There are no comments yet. Be the first one to leave a comment!